The purpose of the disease working groups is to design patient cohort protocols and establish research strategy, and utilise the assets, protocols, processs and design of the PANDIS personalised medicine model.  Each Disease Working Group receives stewardship from the PANDIS team to keep the project on track and the mission realised.

Who can establish a disease working group?

Chronic disease and cancer patient groups who are aligned with our mission and values can establish a PANDIS disease working group, and receive stewardship and organisational assets to raise funds and establish a patient cohort. 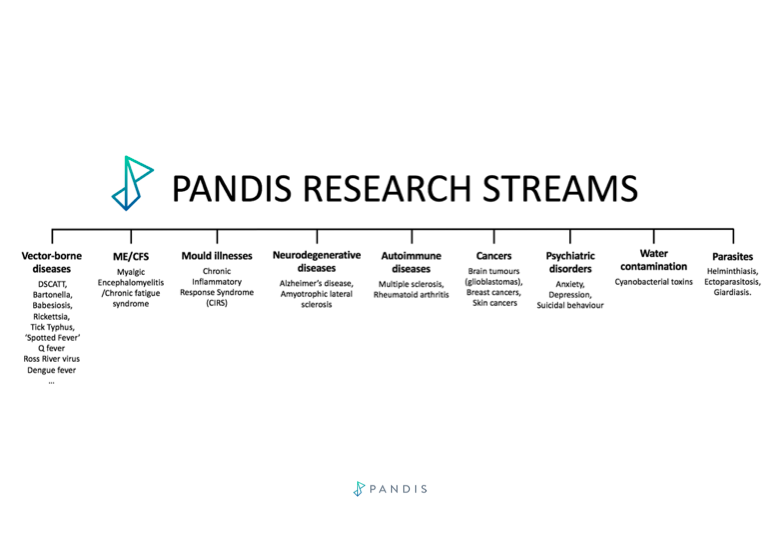 PANDIS is an agnostic model enabling organisations and patient groups to ‘plug and play’, utilising our scientific IP, expertise and assets housed within our personalised medicine platform.

We acknowledge patients and are a patient empowerment movement, providing patients with a centralised place for them to share their knowledge and insights directly to researchers and clinicians as members of the disease working groups.

In 2019, a large and highly collaborative patient cohort in ME/CFS commenced looking at the involvement of microorganisms (e.g. viruses, bacteria, parasites & fungi) in patients. PANDIS manages the ME/CFS biobank.

Several other research projects are in planning thanks to a generous donation from the Geoff and Helen Handbury Foundation.

In 2020, PANDIS is involved in a large-scale cohort to produce the largest study of vector-borne disease patient data in Australia, providing scientific evidence and clinical insights.

A geo-mapping tick tracker app will be available from spring 2020 to track tick bites in humans throughout Australia.

Patron of our mental health and neurodegenerative disease working group, psychiatrist Dr Bob Bransfield has curated peer-reviewed published studies on the link between microbes and mental health and has a private practice focused on causation and correlating factors in mental health.

If you would like to join the mental health working group and help establish a patient cohort, please contact workinggroups@pandis.or

The parasite working group is focused on three key areas:

We are currently recruiting working group members. If you would like to join a working group or learn more, please email workinggroups@pandis.org

PANDIS Director Catherine Stace was previously CEO of Cure Brain Cancer Foundation. It was during this time she, along with a dedicated group of patients, scientists, clinicians, and the Cure Brain Cancer Foundation Board and executive team, became part of a global consortium called GBM Agile and held a scientific meeting where all participants promised to never give up until there are effective treatments for brain cancer patients.

Our promise became our unapologetically bold mission – To increase five-year survival to 50% by 2023. Whilst Catherine is no longer CEO of CBCF, she holds herself accountable to this promise through PANDIS.

According to a report by the International Agency for Research on Cancer in 2008, footprints of microbial infections have been found in 16% and 20% of new cases and deaths from cancer worldwide, respectively 6. This could be attributed to the abilities of some microbial infections to induce DNA mutations, cell signalling modulation, immune response impairment, and inflammation.

Growing scientific evidence suggests that microorganisms could play a key role in the pathogenesis of the human disease8. About 16% of cancer incidence has been associated to microbial infections 6. Microbial DNA, RNA, and proteins have been detected many human solid tumours. Microorganisms potentially can modulate various metabolic pathways, host immune response, gene expression and inflammation process.

PANDIS has established the brain cancer working group to address the key issue of whether microorganisms are associated with the development of GBM. A research proposal is developed and currently seeking funding. For anyone interested to join or the brain cancer working group or fund the research project, please contact Catherine Stace catherine@pandis.org

Send us a message

If you are a patient or want to support a patient, to help achieve our mission please email patientworkinggroups@pandis.org